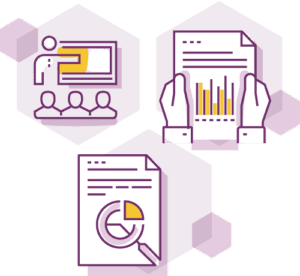 When Greg Connolly was persuaded to give a hand coaching at his children’s GAA club, it sparked an idea for an innovative eLearning product for his software development company, Radii. Greg had to rely on a coach to first teach him the skills and then demonstrate how he could in turn pass GAA skills onto the children.

It was this scenario that got him thinking of other situations where third parties assist a learner after the official training with an instructor, coach or teacher is completed. Greg believed he could develop a digital product that would create personalised learning content and decided to investigate developing it initially within the driving training market.

He asked Learnovate to help him discover how to put this structure in place, and how to translate the product to other industries. The resulting work by Learnovate formed the background to the technology used in Radii’s innovative Go.Drive product and other applications currently in production.

Greg Connolly is founder and Managing Director of software development company Radii, which he set up in 2011 following the success of a number of software products he developed – including an innovative cycling app that gave users real-time updates on bike races.

The company went on to secure many clients in the sector and is the digital partner of educational publisher CJ Fallon, building all its interactive software and digital content for use in classrooms across the country.

In 2013, Radii became a member of Learnovate, initially for the key networking opportunities across Ireland’s eLearning and EdTech sector that membership of Learnovate provides.

“Learnovate run innovation sessions for members and it’s a great way of meeting people in the sector. It has, in fact, been a source of business. We have received referrals as a result of working with Learnovate that we wouldn’t have received otherwise,” says Greg.

Radii then became involved in a number of collaborative projects with Learnovate that included other Learnovate members including Microsoft and the GAA. Two years ago, Radii asked Learnovate to take on a project that would help the company develop a new product for themselves.

“The idea for the product came from situations where a person relies on third-party support to learn something – like the children learning their GAA skills from me, who was not an expert.

“I wanted to explore the relationship between a learner, an instructor and a learner’s sponsor. It can be in any scenario where there are three people involved in the learning. We wanted to see how we could advise the third party on how they could help consolidate the learning delivered by the expert.”

Greg decided to start by developing the concept in the driving training market, which would feature the person learning how to drive, their driving instructor and a third party, who is often a parent or another family member.

He asked Learnovate to help develop a structure to give feedback to the learner as well as create content for the third party. The structure would have to be easily transferable to other industries.

Learnovate’s research and technology was used as background for Radii in creating Go.Drive, Ireland’s first online resource for learner drivers.

“The project went very well and we were really happy with what Learnovate did. They carried out a great deal of R&D and background work for us, which we then used to build on and create Go.Drive. We are also currently working on applications for other industries using this research as background.”

Founder and Managing Director of Radii, Greg Connolly’s background is in software development – but he was also a keen cyclist and the combination of these two interests led him to set up software development company Radii. In 2009, Greg developed an app for cycle races to give users real-time updates on how the races were progressing – a novel concept at the time. When the app was a success around the world, including Ireland, Australia and South Africa, Greg’s business started to grow. At the same time, Greg could see how technology could help people learn and in 2011, Radii was launched as an eLearning and software development business.

Radii is a software development company which provides a range of eLearning, mobile and social software to a range of clients in various industries. Its services range from designing and building software applications for pharma and blue-chip clients, the digital development of campaigns for the advertising and marketing sectors as well as the provision of animation services. In terms of eLearning, Radii blends technology and design to develop classroom eLearning and corporate training solutions for learners in Ireland, across Europe and in the US. Based in Dublin, some of Radii’s clients in the educational field include Houghton Mifflin Harcourt and the company is digital partner to CJ Fallon.

NEXT: Read An Cosán Case Study