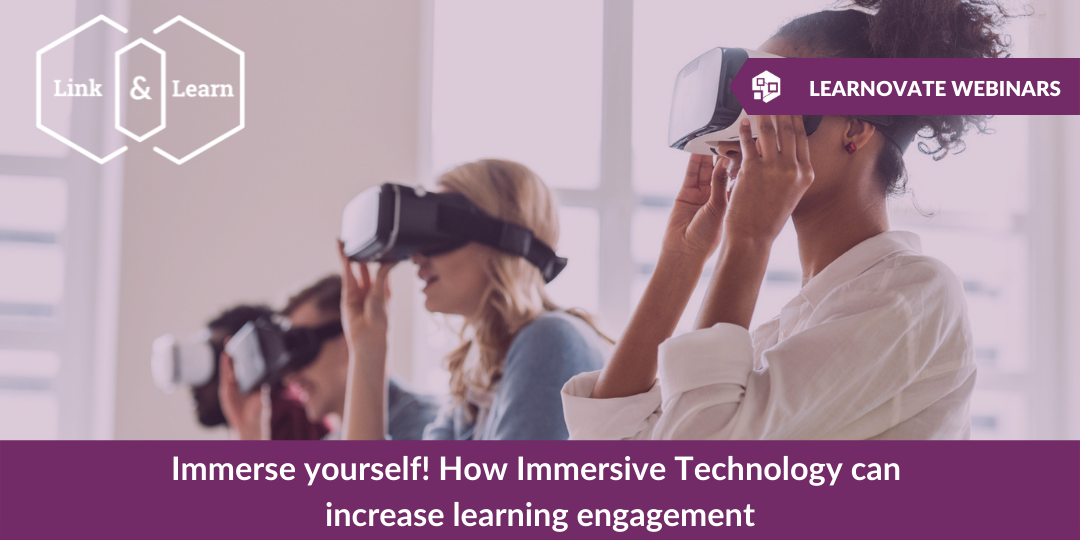 Immersive learning can mean many things to many different people, but essentially it is a learning approach which leverages the use of technology to create simulated, artificial or augmented environments. This mode of learning can encompass virtual reality, augmented reality, mixed reality and 3D virtual learning.

The technology is often combined with concepts such as gamification and data analytics to engage the user and track their experience. If you have ever seen or played Pokemon Go you will see a perfect augmented reality experience in action!

At Learnovate we have recently immersed ourselves in learning all about immersive technology, and how it can be used to enhance learning outcomes for all sorts of industry training. Our research with our industry partners has taken us into the world of safety critical training in fields such as manufacturing, food and beverage and energy.

Join us for our next webinar, where we will present our research findings, showcase our recently designed immersive safety critical training platform, and speak to  industry partners about their experience with immersive learning technology.

Bilal is a Postdoctoral Researcher / Technology Lead for Software Solutions in Edtech at the Learnovate Centre at Trinity College Dublin. His key areas of research are at the intersection of software engineering and human-computer interaction i.e., Edtech, smart ageing, UX research and global software development, augmented with development of software.

He has many years of experience in researching the needs of a diverse set of stakeholders and translating these into software applications (web and mobile).

He holds a PhD in Software Engineering from Lero, the Irish Software Research Centre based at the University of Limerick. During his PhD, he was engaged in research, development and evaluation of a social volunteering network application for older adults with IBM Ireland.

Most recently, he completed a half year long pre-commercialisation program with NDRC Dublin, whilst working as part of a multi-disciplinary team of postdoctoral researchers.
He also holds a BSc and MSc in Computer Science and loves to devote his weekends towards entrepreneurial activities such as hackathons, startup and launchpad events.

Richard is a UX/UI Specialist. He holds a Master’s degree in Electronic Engineering from Maynooth University and a PhD from NUI Galway, where he studied older adults’ user experience with wearable medical devices.

Susan is the Network Manager for Immersive Technologies Skillnet,  a government funded business support agency responsible for advancing the competitiveness, productivity and innovation of Irish businesses through enterprise-led workforce development.
Her background is in Film & Television production,  winning an Emmy for documentary editing, and in education as an adjunct professor of digital media. Susan is also familiar with the start-up ecosystem as the co-founder of an award winning HPSU company in the drone space.

Bilal is a graduate of computer science and having previously worked on large technology projects in UK, Ireland, and UAE, Bilal has developed solutions using new, emerging, and immersive technologies in domain of mental health and mental wellbeing.

He is also a keynote speaker along with having won a number of awards including Top 20 Tech Entrepreneurs by Web Summit, All-Ireland All-Star Thought Leader in I.T. Security and Top 50 Tech Visionary Award as well as CEO of award winning start-ups including the best start-up of the year.

Camille is an award-winning Virtual Reality consultant and content producer with 15 year parallel careers in both technology and the arts (theatre, film, radio). Since discovering Virtual Reality in Jan 2015, and realising the potential for this immersive medium, she has been researching, developing concepts and producing both Virtual Reality (VR) and Augmented Reality (AR) content for a variety of sectors including Healthcare, Training and the Arts.

Camille has 15 years experience in the IT sector in a number of roles. She is also a founding member of Eirmersive (see: www.eirmersive.com ) an umbrella organisation representing the Immersive Technology sector in Ireland.

Date, Duration & How to Join

Add to Calendar: Please register using the link below and create your profile. You will receive email reminders and a link to access the webinar in advance of the event. On the day of the event, you can click on the link in your email to login to the event.

Meet the Patrons Q&A with Dr Kevin Marshall, Head of Education at Microsoft...
Scroll to top