Secondary school students could soon be using volograms to learn about inspiring women in history in a bid to reverse the global trend of few women pursuing careers in science, technology, engineering and maths (STEM).

A new project called Inspiring Women is using Augmented Reality (AR) to present the stories of inspiring women in history who worked in STEM.

Unesco has highlighted the lack of gender diversity in STEM as a global situation, and it is thought that the scarcity of women working in the industry has a negative impact on the design of products.

The Learnovate-funded research project uses actors to depict the women in volograms – effectively full-bodied three-dimensional holograms – which can be viewed on handheld devices in the classroom.

In the AR simulations, the role models outline to students the way they lived, the work they undertook, the contribution they made to society and how they overcame gender stereotyping to pursue an education and/or career.

It is thought that this will change the way students interact with the world around them, stimulate their curiosity and motivate them to learn.

Inspiring Women is entering a test phase with teachers and students this January with the aim of rolling it out in schools in the academic year 2022/23. It is aimed at Transition Year students before they make decisions about their subject choices for the Leaving Certificate examination.

The project has already captured the stories of two Irishwomen who were important historical figures in the area of STEM – Dorothy Stopford Price (1890-1954), an Irish physician who was key to the elimination of childhood tuberculosis in Ireland as a member of the team that introduced the BCG vaccine, and Ellen Hutchins (1785-1815), an early Irish botanist who specialised in seaweeds, lichens, mosses and liverworts and identified hundreds of species.

The actor is filmed in such a way that the finished simulation can be seen from any viewpoint, enabling students to walk around the vologram and see it from different perspectives.

Inspiring Women is a design-based research project being undertaken by Linda Cardiff as part of a Doctorate in Education at Trinity. It is funded by Learnovate with the support of EU’s INVICTUS project.

Learnovate, an industry-led technology centre funded by Enterprise Ireland, provides thought leadership to the world’s learning and development community on the innovative use of learning technology.

The technology partner to the project is Volograms, a spin-out of Trinity that simplifies the process of content creation for augmented and virtual reality.

“At the root of the problem, there is an issue relating to gender diversity in STEM coming from the lack of visibility of historical female role models who studied or had careers in these areas. My goal is to bring the story of pioneering women from history to life to inspire and increase student engagement in STEM education.”

“We are delighted to support this fascinating project, which harnesses innovative technology to inspire change for future generations. We all increasingly recognise the importance of equality, diversity and inclusion in STEM to ensure we build products that work for everyone.

About the INVICTUS Project:

The INVICTUS (Innovative Volumetric Capture and Editing Tools for Ubiquitous Storytelling) Project aims to deliver innovative authoring tools for the creation of a new generation of high-fidelity avatars and the integration of these avatars in interactive and non-interactive narratives. 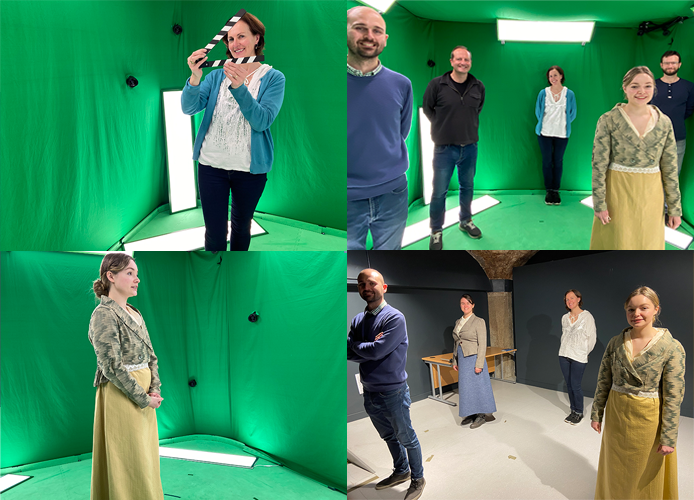 If you are interested in learning more about membership of The Learnovate Centre, please contact us membership@learnovatecentre.org

Link & Learn webinar: Where to Next? The Emerging Learning Landscape
Scroll to top